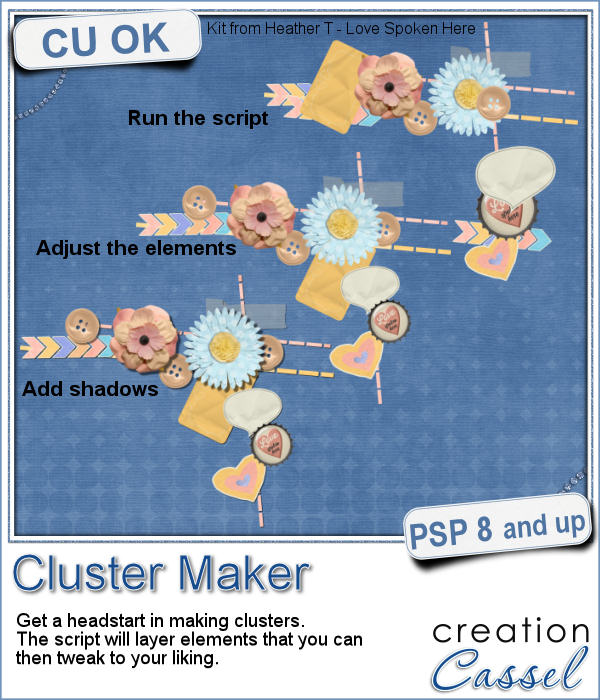 A lot of scrapbookers and designers love to create and use clusters, but the task is often daunting because of numerous repetitive tasks that seem to drain their creativity. So, why not have a script to give them a jumpstart?

This script will almost randomly pick elements from a single folder for you. Starting with long elements like ribbons and stitches. Then adding more rectangular or somewhat smaller elements like frames, cards and such. Finally, smaller or more "square" objects, like flowers, buttons and stickers. Once the elements are picked (one by one), the script will randomly resize them slightly to add variety in your cluster, will rotate them also, and place them based on the type of cluster you want to generate.

You can create a central cluster, or a corner cluster (and you can obviously pick which corner too). And in a single run, the script can generate as many clusters as you want.

Obviously, the script cannot SEE the elements and cannot determine if each element will look good in the cluster. That is YOUR job. But you will have a headstart instead of starting from scratch.

For a chance to win this script, I will make this a little different. I want you to just tell me if you have purchased (or won) any of the other cluster-type scripts in the store. If so, which one. If not, just say so! I'll pick a winner next week and it will be announced in the newsletter. Not a subscriber yet? Not a problem. You can register here and it is free (and you only get one email per week). 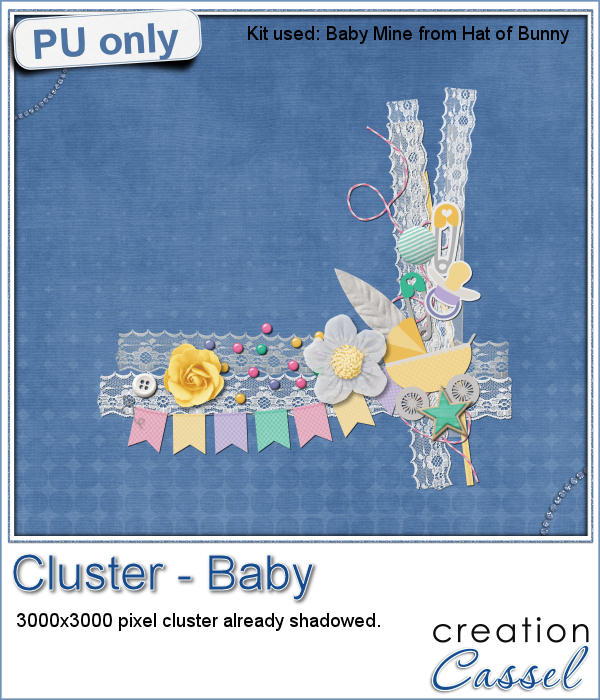 As a samplers, this week, I used a kit from Hat of Bunny, Baby Mine. I ran the script to create a corner cluster for the bottom right corner.

Once the script was done, i tweaked the placement of the elements, and removed a few. Initially, i asked the script to have an average number of elements, knowing i would likely have too many so i could remove them. I also added a couple of elements that were ignored by the script, but that i liked (namely the banners and the string).

All the shadows were added to the elements, individually.