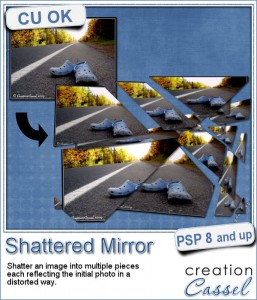 If you like the Shattered script, which breaks up a single image into many pieces, you might actually like this new script. It is somewhat similar to the first one, but in this case, each piece will be converted into a piece of mirror, reflecting the initial image.

You can also let the script move the pieces at random for a really scattered look, or move them yourself (and you can even remove some pieces completely). You can even let the script add a drop shadow to each piece with YOUR favorite settings.

Since every piece is left on a separate layer, you can customize the end result to your liking.

Do you want to win this script? Add a comment below giving ideas on how you think this script could be used (hint, check the freebie below for another idea). I'll announce a winner in the newsletter, next week. Not a subscriber yet? Not a problem. You can register here and it is free (and you only get one email per week). 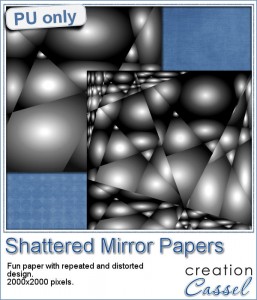 Since this script should be applied on YOUR own photo, it would be totally useless to offer you a free sample with one of my photos. What would you even do with it, right? However, for the fun of it, i decided to run the script on a simple black and white gradient pattern image to see what it would look like. Well, i thought the end result was... interesting.

I ran the script once and then merged the layers, cropped the resulting image and ran the script a second time.  Since the initial image is untouched i was left with the original (the gradient), the first result, and the second one.

Now, what can you do with this odd-looking paper? Try to blur it to get an overlay. Or play with the blend mode to get something different. But if you were to use your own design or gradient, you can create a kind of "crazy quilt" effect, and add stitching along the lines.

You need to be logged in to download this sample. You can either login, or register on the top of this page.
. 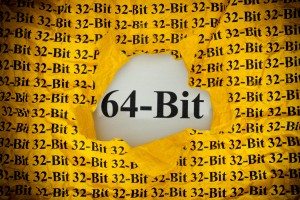 What do you know about 32 bits and 64 bits as far as PSP is concerned? Do you have plugins that don't seem to work on your new PSP versions? check out this blog post on the Corel Paintshop Pro blog for some information from LeviFiction, a regular contributor on the Corel user-to-user forum.